Welcome back, I’ve been on a bit of a hiatus from blogging over the summer. This usually happens due to schedule.  This time around I wanted to take a look at a project I did quite a while back. It totally slipped my mind, but when I saw it randomly on Youtube, I thought to myself, “Hey I shot that!”  It was a very fun little commercial for Speed Network who syndicated the “Pimp My Ride” show.   For those of you who have never seen the show it’s essentially, a make over show for cars where they take an old junker and give it a ridiculous, wild and wacky facelift. I had the pleasure of working with Peter Gagnon, Director.

This shoot was special to me because I had to do an old school practical special effects technique.  Forced perspective.   This was fun because I had to learn how to do this from scratch.   Plundering the internet, back issues of American Cinematographer and the ASC manual turned up a little basic theory but very little practical information.   The name of the game was testing.  The basic idea is that you take a small model, and carefully place it in the scene in the foreground so it lines up with the background and sells the illusion the model is full sized and in the actual environment.  At our first production meeting I got Peter’s treatment, and it involved a person distressed about their crappy car on an ordinary street, when suddenly the host Xzibit’s hand drops into frame like a giant and picks up the crappy car, and drops in the new pimped out whip.  This means a couple things that brought up a few technical challenges.  First;  Forced perspective is usually used with relatively large models because  A: its easier to put detail in to it.  And B: The model is often something stationary like a cityscape, bridge or even a highly detailed matte painting.  They need to be secured down, as even the slightest movement can break the effect.  Also, the large VFX model set pieces serve the purpose of enabling them to be further from the lens, and closer to the subject to allow for a proper line up of the elements.  Our project involved a gigantic hand picking up a car that was not much bigger than the hand itself.  This means a tiny model car.  Which also means it has to be very close to the camera to appear large enough to be real.   Initially we planned on shooting on an F3, but once I saw the size of the car, I knew how close the car had to be ot the lens.   No  tstop no matter how small would cover a DOF range that wide.   It was time to call in an old friend.   The HPX170, a work horse camera from the blossoming digital days, 3CCD, 1/3″ sensor, with gloriously infinite depth of field….  Normally you want the two set pieces as close together as possible.

However, if the elements do move, its important the moving elements don’t overlap too much as it can break the illusion as well.  Unless that is you are Peter Jackson…  Look to the forced perspective used in the Lord Of The Rings to make the hobbits appear small. The built motion controlled sets of different sizes that move in conjunction with the camera to keep the edges of the two sets lined up. 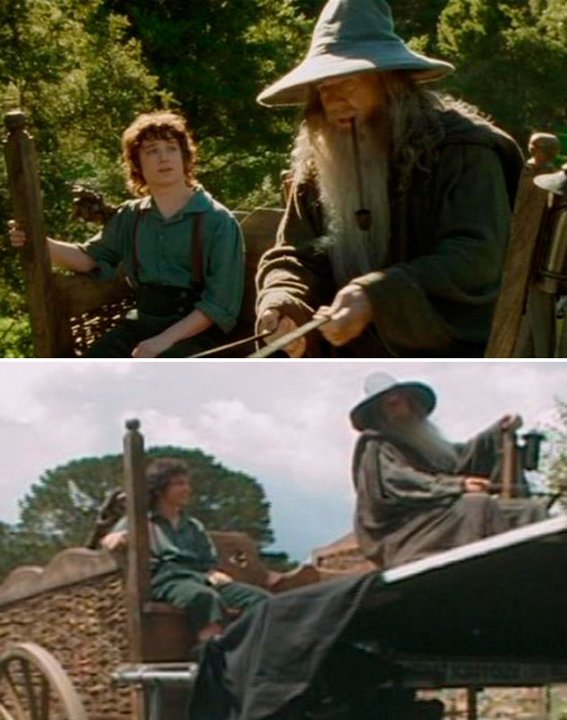 Here are a few quick snaps I stumbled upon from the shoot on my old phone.   You can see how close the car had to be to the camera to sell the effect it was a real car.   If it werent for the optical characteristics of the 1/3″ CCD video camera we may not have been able to pull of this shot. It had been quite a while since i’d used a standard video camera, and its image quality shortcomings were apparent immediately.  Narrow dynamic range, low resolution and antiquated recording formats.  That said, the low resolution actually helped us.  It helped seem the edges of the miniatures set together with the background.   As far as  poor dynamic range, the patron saint of cinematographers was smiling on me that day and we got an overcast day, that made shooting very simple.  A little fill on the talent, and we were golden.

Something very important is that the lighting falling on the background match exactly the angle and direction of the light falling on the model.   Out doors this is easy.  Just let the sun do its thing, but under controlled circumstances, be aware of the shadow angles.  Often you need a lot of distance between the miniature and the unit to ensure the light rays are falling parallel, and matching the background (or foreground depending on the effect you are trying to sell).

Hoped you enjoyed reading this.  It is always nice to be able to use creativity  and some old tried and true technique in accomplishing a shot.